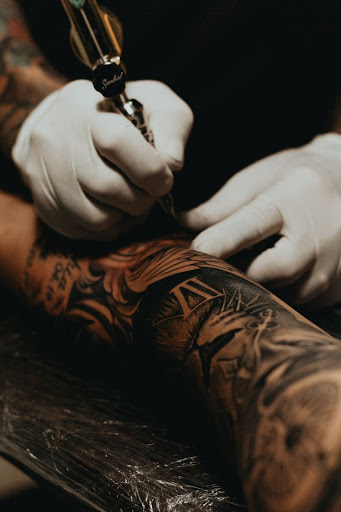 History of tattoosWhat does the Bible say about tattoos?Are tattoos a sin?Remember, your body is a temple

In this age of growing tattoo popularity, many Christians wonder what the Bible says about tattoos and whether it’s a sin to get one.

Despite not directly referencing tattoos in the Bible, there's still mention of how marking your body in any way is considered a sin.

When considering whether it’s a sin in today’s day and age, it’s worth examining how tattoos came to be used in the Bible, despite never being specifically mentioned.

So let’s get into the history of tattoos and how they’re viewed in the Bible.

The tattooing of human bodies dates back thousands of years.

Some of these permanent designs have served many different purposes over the centuries, such as amulets, status symbols, expressions of love, proofs of religious beliefs, adornments, or even punishments for individuals.

The earliest known examples of tattooing were found on Egyptian female mummies dated to 2,000 B.C. There’s further evidence that women had tattoos on their bodies and limbs from recovered artist figurines of females represented in tomb scenes.

The fact that this was an exclusively female practice in ancient Egypt usually led male excavators to look down on female mummies with tattoos, assuming the women were of "dubious status."

Yet, the female mummies were still buried in the same location as the royal and elite burials at Deir el-Bahari, suggesting they may have had a higher status than the male excavators originally believed.

According to one funerary inscription later translated, one of the women first described as a “royal concubine” was a highly regarded priestess named Amunet.

A point set into a wooden handle discovered by archaeologist W.M.F. Petrie at the site of Abydos was used to make tattoos.

But some artist figurines are decorated with more naturalistic images.

Tattoos were used in ancient Greece and Rome to identify people as belonging to a religious sect. Slaves were also marked by the people who owned them. Tattooing was even used as punishment for criminal behavior.

In Biblical times, tattoos were popular with Roman soldiers as a symbol of status. They spread throughout the Empire until the emergence of Christianity when Emperor Constantine prohibited tattooing in 306-373 A.D.

Now that we understand the history let’s talk about what the Bible says.

What does the Bible say about tattoos?

There are at least five Bible verses in the New Testament and Old Testament and that would help us decode what God truly says about tattoos or any other form of body modification.

“You shall not make any cuttings on your flesh for the dead, nor tattoo any marks on you: I am the Lord.” (Leviticus 19:28)

“Do not think that I came to destroy the Law or the Prophets. I did not come to destroy but to fulfill. For assuredly, I say to you, till heaven and earth pass away, one jot or one tittle will by no means pass from the law till all is fulfilled.” (Matthew 5:17-18)

“Do you not know that you are the temple of God and that the Spirit of God dwells in you?” (1 Corinthians 3:16)

“Or do you not know that your body is the temple of the Holy Spirit who is in you, whom you have from God, and you are not your own? For you were bought at a price; therefore glorify God in your body and in your spirit, which is God’s.” (1 Corinthians 6:19)

Despite all these verses portraying tattoos and body markings negatively, is getting a tattoo still considered to be a sin today?

Are tattoos a sin?

A person who wants to abide by all the rules listed in the Bible very strictly should look at some of the other old Scriptures.

By way of example, Leviticus 19 forbids people from shaving their heads or shaving their beards. It also prohibits them from wearing clothes made from foreign materials.

If one wants to follow strict religious rules, that's fine, but it's a bit difficult to do so in today’s day and age. Currently, it's not viewed as a sin for people to shave or cut their hair regularly. Baldness isn't considered a sin, either. And plenty of people pierce their ears to wear earrings.

Young teens are especially exposed to piercing and tattoos. But getting your teens and tweens involved in a youth ministry can be a great way to guarantee they make good choices and won’t do something they later regret.

In present times, people don’t take verses in the Bible at total face value. Instead, we interpret the teachings and messages in our own way to make flexible choices.

Many Christians today are getting tattooed. Crosses, praying hands, portraits of Jesus Christ, and popular Bible verse tattoos make up a large majority of the world’s tattoo patterns.

For those who want to get a tattoo, it can be a good way to keep God’s word with you. It’s also a great conversation starter. In fact, religious tattoos are often seen as a great way to spread God's word.

There are also plenty of Christian tattoo designs for small tattoos, like King of Kings, Lord of Lords, and Glory of God.

Remember, your body is a temple

Even though the Bible doesn’t explicitly address tattoos as we understand them today, that’s hardly an excuse to go out and cover yourself with them.

Whether you are a Christian or not, you should still think long and hard before you get inked up. Bible study, prayer, and seeking the guidance of Christ and the Holy Spirit are all ways to gain wisdom and spiritual insight for any decision you make.

Nevertheless, just because you don't make the decision for your own body doesn't mean you can call someone else's decision to get one a sin.

For more information about what the Bible says, download the pray.com app in the iOS App Store or Google Play.