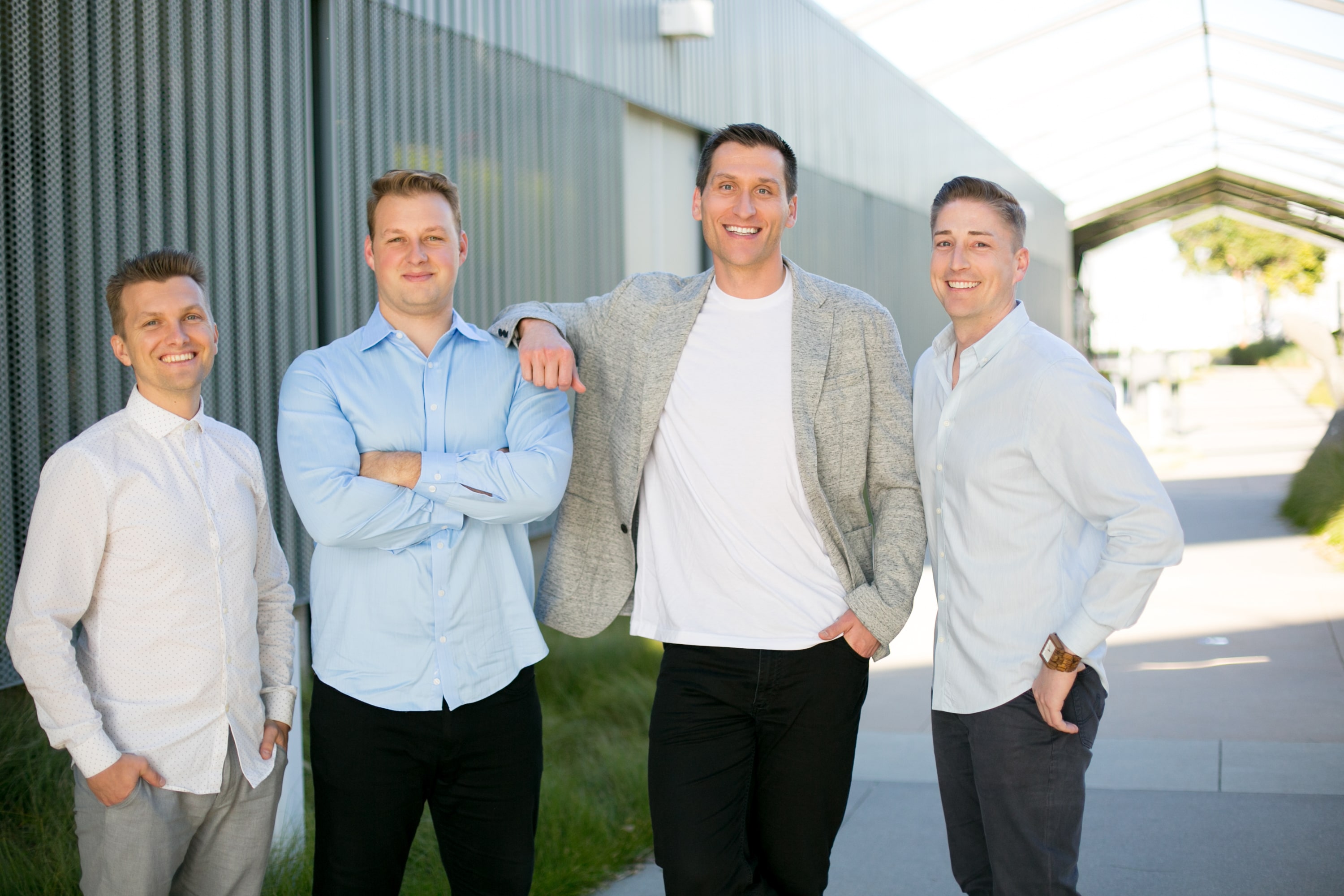 Pray.com is a social impact company: we're driven by a mission to grow faith and cultivate community.

Pray.com is the world's #1 app for faith and prayer. The Pray.com mobile app gives you the chance to make prayer a priority with daily devotionals, hear the Bible come to life with original content, and fall asleep to Bedtime Bible stories narrated by inspirational celebrities.

The Pray.com team is comprised of people from all backgrounds – some of us pray, some of us meditate, and some of us just want to see more empathy in the world. At Pray.com we walk the talk, live the d.r.e.a.m., and combine our talents to build something bigger than ourselves.

Pray.com's vision is to create a world where everyone leaves a legacy of helping others.

Steve Gatena is the founder and CEO of Pray.com, the world's #1 app for daily prayer and faith-based audio content. As a social impact company, Pray.com is driven by a mission to grow faith and cultivate community. Pray.com is the only religious app in history to become a Top 5 grossing Lifestyle app in the Apple app store.

Gatena started his first company, REP Interactive, at the age of 22. REP Interactive went on to become the fastest-growing video agency in the United States and one of the best workplaces in America according to Inc Magazine. Gatena has won more than 100 awards for his work in video & broadcast media for brands like Coldwell Banker, the Los Angeles Dodgers and Marriott Hotels.

Continuing his success, Gatena launched VideoFort, Hollywood's largest aerial stock footage manufacturer in 2012. VideoFort supplies companies like Getty, Adobe, and Shutter stock with world-class aerial footage that has been featured in blockbuster movies, including “Transformers,” award-winning TV shows such as Discovery “Planet Earth,” and a variety of major television commercials.

In 2014, Gatena was named "Entrepreneur of the Year"​ at the United Nations EMPACT showcase, a program sponsored by Dell and Intel. Just one year later, he sold his first two businesses and became the CEO of Helinet, a global leader in aerial surveillance systems and aerial video production.

After the tragic passing of his mentor and business partner, Alan Purwin, Gatena left Helinet to start Pray.com as the digital destination for faith. Pray.com’s website and mobile app was designed to be the easiest way to incorporate prayer into your daily life. The company became a quick success, becoming the No. 1 app for daily prayer & faith-based audio content just two years after launch. Since2017, Pray.com has been named as one of the Best Places to Work by the Los Angeles Business Journal, one of the fastest growing mental health apps by SensorTower, and one of the top companies for employee recognition by TinyPulse.

In his most recent accomplishments, Gatena was honored with CSQ Magazine's 40 Under 40 Visionary Award and in 2020, the President of the United States appointed him to serve as a non-partisan advisor to the White House on cybersecurity matters.

Michael Lynn is a co-founder of Pray.com where he serves as Chief Financial Officer. Pray.com is the world’s #1 app for daily prayer and faith-based audio content, driven by a mission to grow faith and cultivate community. He helped start Pray.com in 2016.

Before joining the Pray.com team, Lynn spent 13 years at Merrill Lynch as a private wealth advisor specifically in the Private Banking and Investment Group (PBIG). In addition, Lynn served asa board member for LA’s Best After school Enrichment Program, an organization that brings safe and enriching after-school education and recreation to elementary school children in Los Angeles. Lynn brings expertise in the areas of financial management, political affairs, and asset protection to the Pray.com team.

Always interested in entrepreneurship but waiting for the right idea, Lynn attended a conference in Santa Monica, Calif., where a panel of entrepreneurs from USC and UCLA shared their stories. Standing out among the panelists was Steve Gatena, fellow co-founder of Pray.com. Lynn introduced himself to Gatena, and they became friends. During the summer of 2016, as they met for pizza, Gatena introduced Lynn to the concept of Pray.com. That very night, because he trusted Gatena and believed in the idea of delivering faith to more people, Lynn decided to leave his career at Merrill Lynch to help found Pray.com.

Lynn is a confirmed Catholic and values the importance of faith. His time at Pray.com has strengthened his own faith and widened his perspective on prayer, as Pray.com is an all-inclusive app that helps everyone make prayer a priority in their life. Developing a core competency in political affairs, Lynn has facilitated conversations between Pray.com and the President of the United States, the President of the United Nations General Assembly and the Vatican City State. Furthermore, he worked with the Federal Election Commission to issue an opinion that allowed members of the U.S. Congress to appear on Pray.com.

Born and raised in Green Bay, Wisconsin, Lynn came from a modest, blue-collar family. He was inspired to enter a career in finance after an advisor took advantage of his mother in a poor investment, and he wanted to prevent that from happening to other individuals. Lynn graduated from the University of Wisconsin with a Bachelor of Science in personal finance and then moved to Los Angeles to attend the University of California, where he received his MBA with a focus in finance and concentration in entrepreneurship. Lynn is an avid runner and completed three marathons in 2019 as well as running his own in 2020 amidst the pandemic.

Ryan Beck is the Co-founder and Chief Technology Officer of Pray.com, the world’s #1 app for daily prayer and faith-based audio content. Pray.com is driven by a mission to grow faith, cultivate community, and leave a legacy of helping others. Beck brings expertise in computer science, software engineering, and theological studies to his role as chief technology officer. He helped start Pray.com in 2016.

As with many young people growing up in difficult circumstances, Beck was introduced to drugs, gangs, and violent crime at an early age. Early drug use got him kicked out of school for the first time as a sophomore. Three months before graduating high school Beck was arrested for assault. Upon his release from jail, he began selling drugs, instead of using them. Subsequently, Beck was arrested again, this time for the distribution of narcotics, convicted, and sent to prison. It was in jail that a fellow inmate encouraged him to turn his life around, introducing him to the Bible, and encouraging him to explore his faith in Christ.

Following his period of incarceration, Beck was given the opportunity to attend Calvary Bible College, where he was able to study theology and nurture his calling to create a Kingdom impact. While he did not feel called to be a minister, Beck did go onto pursue a double-major in philosophy and computer science at Calvin College, where he developed specific skills to serve organizations seeking to serve people at the intersection of technology and faith.

In 2016, Beck reunited his relationship with Steve Gatena, a childhood friend from middle school, where Gatena shared his vision for a new project he was working on called Pray.com. Gatena invited Beck to join him and fellow co-founders Matthew Potter and Michael Lynn to build Pray.com as the digital destination for faith in 2016. Prior to coming to Pray.com, Beck had served as a backend engineer with Mission India.

Beck is married to his incredible wife, Jeanette, who prayerfully helped him in making the decision to join Gatena and the Pray.com team as a co-founder of what has become the world’s #1 app for daily prayer and faith-based audio content.

Matthew Potter is a co-founder of Pray.com, the world’s #1 app for daily prayer and faith-based audio content, driven by a mission to grow faith and cultivate community. He brings expertise in the areas of strategizing change, building tech products and apps, and finding markets in the continuously evolving technology industry.

At a time when Potter was looking for ways to give back and become more spiritually connected, he serendipitously ran into his friend Steve Gatena at a coffee shop in Santa Monica, Calif.  He could tell Gatena had been struggling and they spoke of the recent loss of his friend and business partner in a plane crash, but how he was beginning to find hope again through prayer. Shortly after that divine run-in, Potter joined forces with Gatena to launch Pray.com, desiring to apply his expertise to do something bigger for theKingdom of God.

Before Pray.com, while he was still a student at Boise State University, Potter created HomeStack, a white label real estate app. HomeStack launched in 2012 and Potter served as CEO until he stepped down to become a part of the team at Pray.com. Potter continues to serve as Chairman of the Board for HomeStack. In addition, Potter has developed over 6k apps.

Calling Southern California home, Potter is from Westlake Village, Calif., and enjoys traveling to new countries, investing in real estate, and visiting new sports stadiums. He currently serves on the board of trustees at Southeastern University in Lakeland, Fla. Recently Potter has been featured on multiple podcasts including Seek. Go. Create. and The Mike Thakur Show.

4 Powerful Morning Prayers To Start Your Day With Gratitude

Who's Archangel Michael? The Story, Symbols, and Prayers

The Serenity Prayer origin and meaning

What Is Self Awareness